Part of the joy I often take away from attending races, either as a competitor or as a spectator, are the encounters I regularly have with people I find interesting.  While watching the Leadville mountain bike race finish on Saturday I chatted with a guy about endurance performance at altitude and he told me about a race, also happening this past weekend, in India.  In the Himalayas.  It is called La Ultra The High.  In short, the race covers 138 miles, climbs over two 17,5 ft passes, while averaging 15,3 ft.  Apparently six people started the race this past weekend, in the race’s second year, and all six finished.  Including American, Ray Sanchez, who finished second.
Check out the race profile chart below, taken directly from the website, comparing Leadville, the Everest Marathon (world's highest marathon) and La Ultra The High.  Can you imagine running straight downhill- at altitude- for 50 kilometers?  Even if at a slow grade.  Or how about running straight up for 100 kilometers, after running 90?  The long chasm valley between downhill and uphill running is likely indicative of the range of weather and physical, mental, spiritual, even metaphysical, variances one must experience during such an event. 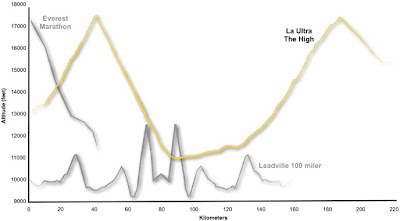 A trip to the Himalayas would be a true life experience.  Running La Ultra The High may be- just maybe- a good reason to go some year.
Posted by Neal Gorman at 8:20 PM