Today was a great day for race spectating.  A family posse and I navigated the Washington D.C. streets this morning for the Marine Corp. marathon and watched my older sister Margaret finish strong amidst a sea of 34,000 entrants.  It was good fun watching, cheering and sightseeing.  The sheer volume of work hours, organization, marines, police, volunteers, road closures, food, water, etc. it must take to make a race like that happen is mind boggling.  Also, upon exiting the Smithsonian Metro Ryan Hall ran by on an individual jog around the monuments.  We exchanged pleasantries as he maintained pace.  That was cool.

Here is Margaret running through the aid station at mile 16. 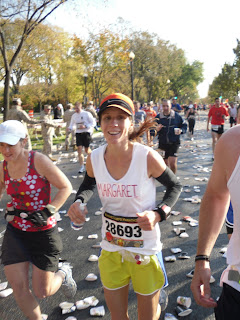 Today is mine and Gaby's five year anniversary.  A happy hallmark for sure.
﻿﻿﻿
In other news, I will run Masochist November 6th, which will be my final race of 2010.  My last race, Wasatch, was six weeks ago today.  And it wasn't until about 2.5 to three weeks ago that I started logging decent runs here and there.  Last Saturday I escaped D.C. early in the morning for a 27+ miler in the beautiful Shenandoah Mountains.  The weather made for perfect Fall conditions.  And though there was hardly anyone else around during my entire jaunt the forest teamed with life and sound.  Howling winds, crackling branches, rustling leaves, crashing streams, chirping birds and insects, fattening deer, a bear cub, etc. presented so many sights and sounds to enjoy as I plodded along.  It was easily my longest training run since early June.  (Which is frightening considering what, and likely who, I will be up against at Masochist.)  And with all of the climbing, by the end, I was pooped.  So, along with my speed, my endurance and quads are apparently shot as well.  This week's running improved a bit, though soreness remains.  Enter the taper.  Hallelujah.  After Masochist it will be time for rest.  I am tired.  My body has spoken and I will heed it’s message.  By Thanksgiving the taste for trails will be back with a vengeance, as the return of Thanksgiving signals our annual pilgrimage to Vail; my true north.  Steep snowy trails will soon be calling.  And before all of this goodness- Masochist, rest, Thanksgiving, skiing and trailing in Vail- comes Halloween.  More goodness.

Dear Mother Nature,
How are you?  I hope all is well.  I write to tell you that last winter was excellent.  I greatly enjoyed the bountiful snowfall and truly hope for more this coming winter.  Spring, my favorite season, was great, too; all three days of it.  Summer in D.C. has been another story.  We are grateful for our good days but mostly summer has been a series of ups and downs.   An early season drought, eventually corrected by torrential down pouring storms, followed by yet another drought, then topped off with a drenching tropical storm, all the while intermingled with record days exceeding 90 and 100F in temperature.
Today is October 11th and I imagine myself running your wooded trails, in crisp, cool air, scanning the earth for leaf camouflaged roots and rocks, as I tip toe over acorns under kaleidoscopic foliage and brilliant, azure skies.  However, today the temperature climbed high into the 80s, conjoined with humidity.  Nary a colored leaf hangs from branches and I am curious, have you forgotten the time?   Are you still going forward with this whole fall thing?  If not, I beg you reconsider.
Waiting for fall,
Neal
Posted by Neal Gorman at 9:41 PM 2 comments:

VHTRC. What's in a name?

The Virginia Happy Trails Running Club is great.  Seriously.  Good organization, people, races, parties, etc.  Kudos.  The widely accepted moniker "VHTRC" is what the Club is commonly known as since sounding out "Virginia Happy Trails Running Club" takes approximately 1.5 extra seconds; hence, the acronym.  Do many runners outside of the Club who recognize the name VHTRC even know what it stands for?  Does it matter?

Therefore, VHTRC Board, I propose a name change.  Though maybe only for a day.  Keep VHTRC, only, change the definition.

For example, we could go with Virginians Hoping To Recruit Canadians.
or Vaseline Happens To Remedy Chafing,
or Valium Helps These Runners Cope.

Or perhaps we should just leave the name alone and I should find something better to do.
Posted by Neal Gorman at 2:42 PM 1 comment: