Our bodies in the heat

Here is a neat overview/reminder from the Washington Post about how our bodies respond, cope and acclimatize in the heat.  Just in time considering summer is here- at least on the right coast.  And so is the season of 100s.

Speaking of heat and 100s, Old Dominion is this weekend.  Anyone know who is running and which guys and gals might have the best chance of taking home the beautiful silver buckle with a "FIRST TO FINISH" brass emblem?  The OD folks continue their old fashioned ways by not providing us running geeks with an entrasts list to examine.  Anyway, good luck to those toeing the line.  Currently the weather calls for highs in the mid 70s in Woodstock on Saturday.  With temps like that, you guys might luck out!
Posted by Neal Gorman at 10:51 AM 1 comment:

FKT at The Priest and Three Ridges

Here is a link to the evidence of all of my babbling: GPS details.
And here is me after finishing back at the trailhead off 56. 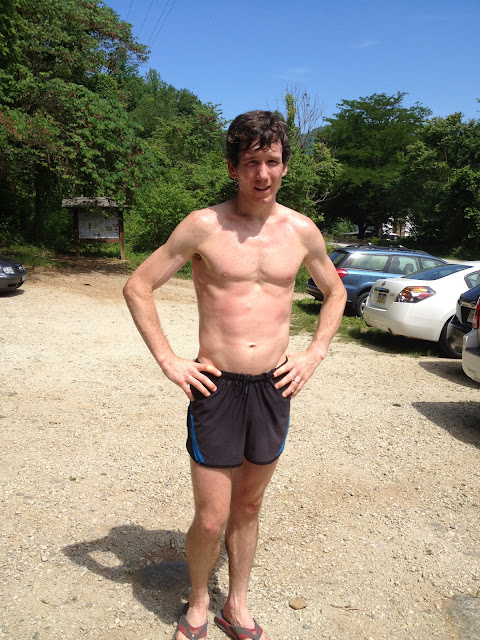 My objective in this post is not to cause a big fuss or develop a conversation ad nauseam about UROY, but simply to share an opinion I currently hold.  Thus far, in 2012, male UROY is a one horse race.  Bryon Powell, of iRunFar.com (obviously), is way out in front as the leader.
Bryon’s tireless efforts at iRunFar.com provide running geeks worldwide constant information, which stirs all sorts of conversations, provides inspiration and entertainment and, in the process, has helped to take trail running and ultra running (in the US, at least) to a whole new level.  By providing to the masses a steady stream of race previews, results, interviews, feature stories and photos of runners smoking cigars Bryon is seemingly everywhere, all the time.  Clearly, Bryon is on top of his game and in a class of his own.
A casual look back on the early months of 2012 reveals Bryon on-site covering numerous events, both racing and otherwise.  A look forward is no different.  Or maybe it is in that Bryon will be even more places.  Here is a quick guess of where else Bryon will be in 2012, inspiring and entertaining us: Western States, Pikes Peak, Leadville, UTMB, Wasatch, UROC, Run Rabbit Run, NF San Fran, and God knows at how many other races and events.  Who else can touch this?  Knowing that Bryon will no doubt continue his tireless efforts over the remainder of 2012, I think it will take a series of truly unbelievable performances, acts and or occurrences for a second male runner to come even close as UROY.
To my knowledge, no “runner” has ever been voted UROY without running a single ultra marathon in the year of actual voting.  And to my knowledge, Bryon hasn’t raced since last year, though he is expected to toe the line at Leadville in August.  I hope Bryon runs Leadville, and finishes of course, because without at least a single race result to his credit in 2012 it is unlikely he will get the nod as a candidate.  Hell, he may not get the nod anyway but he damn well should.  Then again, I’m just a guy with an opinion.
Posted by Neal Gorman at 2:37 PM 12 comments:

Hard to believe that tomorrow morning’s Montalto Challenge will mark my 8th race event in as many consecutive weekends.  It’s been a fun ride, these past two months, getting out on the trails, and the roads, through the towns, the woods and over the mountains, mixing it up with all sorts of folks.  Running back to back races, over varying distances and terrain has opened new doors for me- it has revealed strengths I didn’t realize I have, as well as a few weaknesses.  Weaknesses I will most certainly attempt to address.
Admittedly, since Bull Run, I haven’t made an honest effort at recovering.  The big weeks and big workouts resumed immediately following that race, right through Promise Land last weekend, where I do believe I paid the price having no real pep left in the legs climbing mountains.  From the go, up the first climb, I felt it.  Or should I say, I didn’t feel it, because there wasn’t much there.  Still, what an event David Horton has assembled in The Promise Land, and I did my best to enjoy it.  The stories are all true: it’s hard, it’s beautiful, it’s significantly more than 31 miles in length, Clark Zealand’s 2002 course record was indeed super stout and Eric Grossman’s epic run, where he lowered Clark’s time by four minutes and 48 seconds, will live on as a memorable performance.   If you haven’t read Eric’s race report, by the way, you’re missing out; it is a beautiful piece.
I’m certainly looking forward to Montalto tomorrow but at this point I’ll be glad when next weekend rolls around.  It is time for really long runs in the mountains.  It is then when I’ll figure out if all of this short spring racing business was actually beneficial in terms of lessons learned and building my fitness, or if it were only a fun ride.
Posted by Neal Gorman at 7:35 PM No comments: